VHD (Virtual Hard Disk) is a file format used by Microsoft Virtual PC to represent a virtual hard disk drive (HDD). A VHD file will have the same contents of a formatted physical hard disk drive, including a boot record, disk partitions, file systems, files and folders. A VHD file is typically used as a logical disk in a virtual machine. But a VHD can also be attached directly in Windows 7 (or later).

Just like physical hard drives, VHD files are at risk for corruption, accidental deletion, virus attacks and other causes of data loss. As such, the ability to recover data from a VHD image can be very valuable. R-Studio offers several ways to do that.

Scenario 1: Virtual Hard Disks are healthy and can be attached in Windows

1. Attach the VHD image to the system from the Windows Disk Management utility.

If successfully mounted, the partitions will be assigned drive letters. They will also appear as normal disks in R-Studio.

2. Process the attached VHD disks in R-Studio as regular disks. 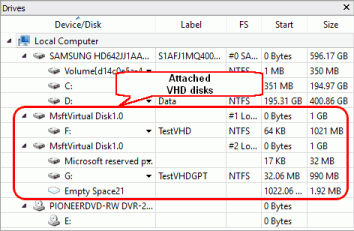 Scenario 2: Virtual Hard Disk files are corrupted and cannot be attached to the system

These steps can also be used if your Windows versions cannot attach a VHD disk directly (e.g. Windows XP, Windows Vista or earlier).

1. Open the VHD files as disk images. You may have to change file types to "All files" on the Open Image File dialog box to see files with the default VHD disk file extension .vhd. Scenario 3: Virtual Hard Disks are stored on a disk with damaged file system and cannot be accessed directly

This method will only work if the VHD disk files are unfragmented. See File Recovery Basics: How Data Recovery Works for details.

1. Scan the disk (the logical volume or the entire hard disk drive) on which the VHD disk files resided. In the Scan dialog, choose the appropriate file system for the partition you are searching for (NTFS in our case).

2. Locate the VHD disks among the recognized partitions. They will be marked in either red or green.

You may also be able to recognize the partition by its file system, size, or other disk parameters.

3. Double-click the found partitions to open them and recover the data. As with regular disk objects, you can perform deeper analysis, create copies of the images, etc. as necessary.

1. Determine the accurate offset and size (in sectors) of the partition to be analyzed on its Properties tab. Fig. 5: The VHD disk and its parameters
Click image to enlarge

Tip: You can double-click the parameters to copy and paste them into Notepad for later use in the Create Region dialog box (Step 2).

2. Using the parameters from Step 1, create a region on the host disk. Make sure to set the units to Sectors in the Create Region dialog.

Fig. 6: The VHD disk as a region on the host disk and recognized partition
Click image to enlarge

Conclusion
R-Studio has the capability to find lost partitions, recover data and copy data from VHD files. The file recovery and disk analysis methods vary depending on your scenario. If you are running Windows 7 or later and the VHD files are not corrupted, you can easily scan the VHD in the same way you would a normal logical volume. For other cases, more advanced methods can be employed to locate and recover lost data.

Data Recovery Articles
PC Privacy Articles
Data Recovery Feedback
370 feedbacks
Rating: 4.8 / 5
I really love your R-Studio product, I am doing Data Recovery as a professional, I used RS since the early versions and I loved the product, as far as I can tell, R-Studio, especially the Tech Version (but including the standard) is one of the best and excellent tools for a pro to have in the arsenal of tools in a pro DR lab, especially combining with the specialized Data Recovery hardware providers like DeepSpar, and PC3000, the rest of `wannabees` out there are waste of time, strongly recommend
Michael Avraham (OmniDataPlus Data recovery and repair)
I lost more than 200K files from my NAS due to a mistake. I tried 3 different recovery solutions over the 4 TB raid disks, and all of them performed ok but to be honest none of them were able to Raw recover the files and rename them with meaningful names out of the Metadata like R-TT did, then I was able to sort again my files and pictures and kind of restore all of them.

R-TT may not be the easiest or most user-friendly solution, but the algorithm used for the renaming saved me THOUSAND of hours of opening ...
Cesar reyes
Just recovered my old ext4 partition with R-Studio after trying testdisk and R-Linux without success. That partition was overwritten by another ext4 partition and I was losing my hope until I tried R-Studio demo. It detected all my files and directories again!