The Mac OS X operating system allows its users to create only software mirrors and stripe sets (RAID 0). For the latter, it's necessary to specify some parameters when creating their virtual counterparts in R-Studio for data recovery. If those aren't known, most likely they have the following default values:

A typical virtual RAID setup for such stripe set is shown on the Fig. 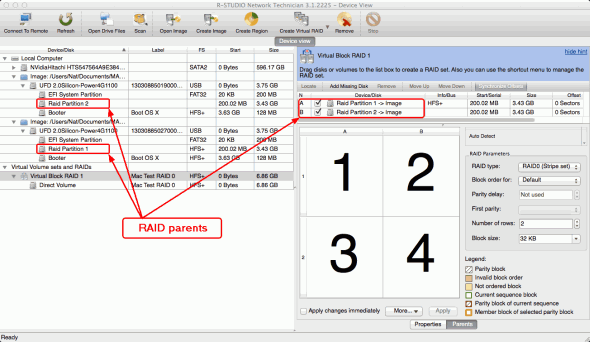 Please remember that stripe sets (RAID 0) don't provide any means to protect data against its lost due to disk failure. If any disk from such RAID layout physically fails beyond recovery, all data from the entire RAID setup will be lost completely.

If all disks of a stripe set (RAID 0) are healthy and no data on them is corrupted, R-Studio should be able to re-construct it structure and recover its files.