When we discussed data recovery from RAIDs, we assumed that we already knew the RAID parameters. However, in some cases we do not know the parameters of the RAID to be reconstructed. How do you find the required parameters? RAID vendors can help you with their default values, but sometimes the parameters were customized and are now unknown. Can R-Studio help in this case? Yes, we can use either automatic RAID parameter detection, or the built-in Text/hexadecimal editor to analyze data in RAID components for the purpose of finding its parameters. In this article we will show you how to do this, using a simple NTFS RAID 5 as an example. The article Automatic RAID Parameter Detection explains how to find RAID parameters automatically

So, let's try to find the required parameters for a simple unknown RAID 5.

Its unknown parameters that must be found are:
1. Disk order
2. Block size 3
3. Block order
4. Disk offset

Please note that even though R-Studio has found a Disk1 object on Disk2.arc, that does not necessarily indicate that this is the first disk in the RAID.


Finding Master Boot Record
First we need to find the MBR to determine a RAID offset.
1. One after another, open all the tree image files in the Text/hexadecimal editor.
2. Do not enable write to prevent accidental data corruption in the objects being edited!
3. Write down the Windows disk signature for each object to recognize later which Editor's window belongs to which object.
4. Search for the MBR start block. On the Search dialog box, enter 33 C0 8E D0 BC (this is a standard MBR start block, but in some cases it may be different) into the HEX field; then select From start position and enter 0 in Search at offset.
5. Click OK to start searching. 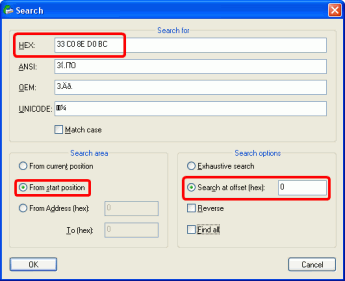 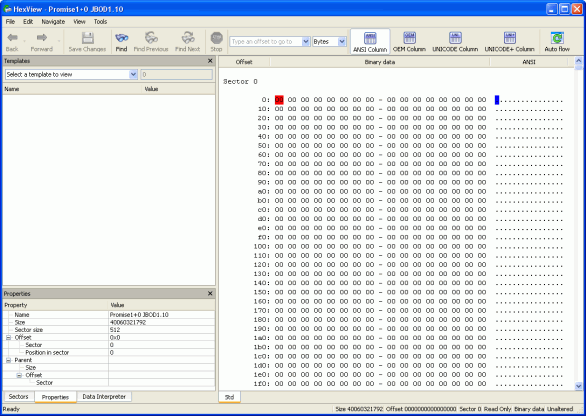 Click image to enlarge
Disk1.arc opened in the Text/hexadecimal editor 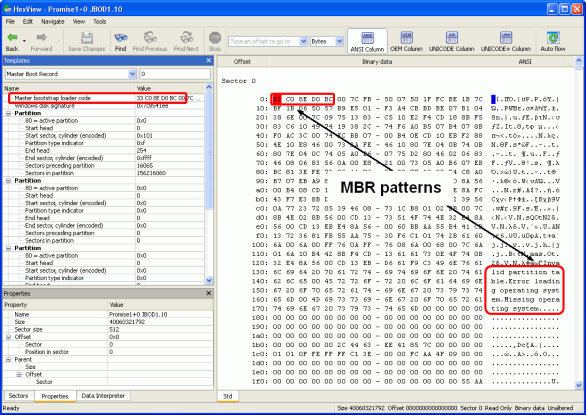 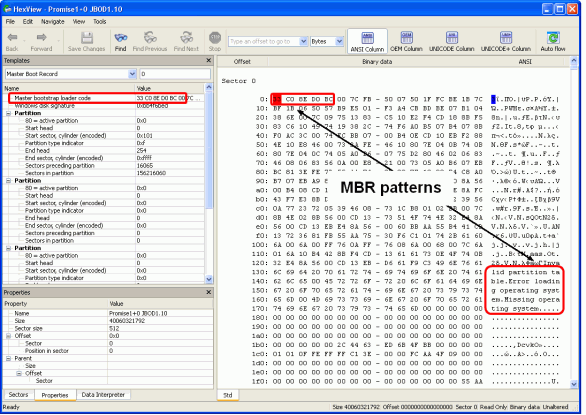 The result is that the Text/hexadecimal editor finds this pattern at address 00 on Disk2.arc and Disk3.arc; Disk1.arc shows only zeros. That means that the offset is 0, and Disk1.arc cannot be the first disk in the RAID.

Meanwhile, the Editor correctly recognized those patterns on Disk2 and Disk3 as master bootstrap loader code. In our case, two disks have the same MBR data on the same place.

Now, as a second step, we need to find the NTFS boot sector.
Take a look on the Sectors preceding partition field on the Template pane 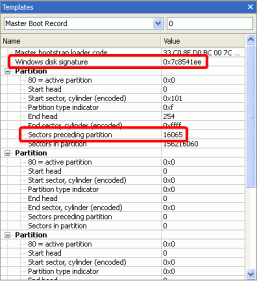 Click image to enlarge
Template pane for Disk2 and Disk3

For our case, the sector preceding the partition is 16,065.

If this value is larger than 63, we should divide it by N -1, where N is the number of disks (in our case, N = 3), which gives us 8,032. This is an approximate position to start searching for the NTFS boot sector. We will start the search from this position to avoid finding false NTFS boot sectors that may remain from previous NTFS partitions.

Jump to that sector in the Editor and then search for the NTFS boot sector pattern. 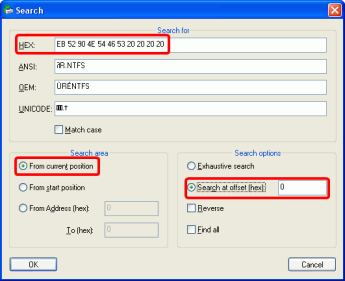 The Editor finds this pattern at sector 8064 on Disk2 and Disk3. 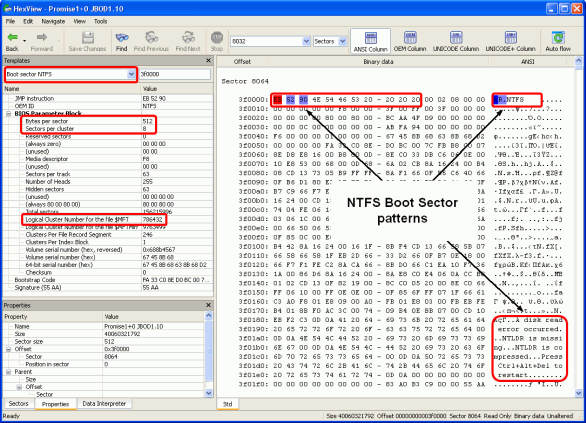 Required parameters that we have found
Bytes per sector: 512
Sectors per cluster: 8
Logical Cluster Number for the file $MFT: 786432

Next we need to find the MFT (master file table) on the disk:

2. We will begin to search for the exact MFT start at a position a couple thousand sectors less than this value. Say, sector 3,140,000.
On the Search dialog box, enter "FILE" into the ANSI field, then select From current position and enter 0 in Search at offset. 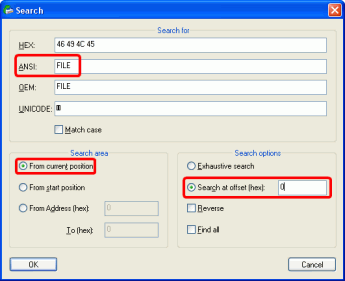 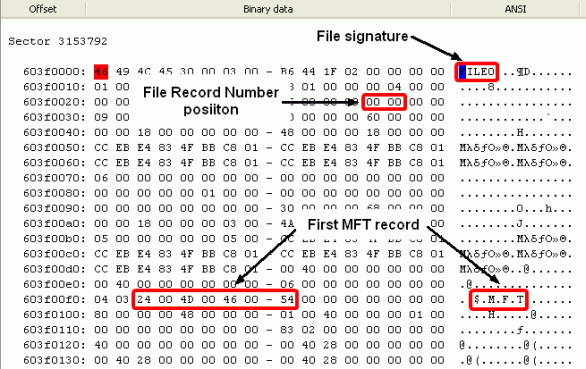 What is important: The signature FILE ends with 0, which means that the file record number is not overwritten with a fixup. If it had ended with * (FILE*), we would not have been able to proceed further in our search and would have needed to use another technique.

To proceed further, we need to keep in mind that a file record in MFT occupies two sectors, and that data is written to a RAID 5 successively, one data block to one disk, then the next data block to the next disk, and a parity block to the third disk. We can represent an example of such a scheme in the following table ...


... where the numbers represent the order in which the data blocks are written to their respective disks, and PD stands for the "parity of data" block.
(This table represents only an example, and the block order may be arbitrary in a general case.)

Such a search can be done by scrolling down the text in the Editor by two sectors.

The final results are represented in the Table below:
No records mean this is a parity block. 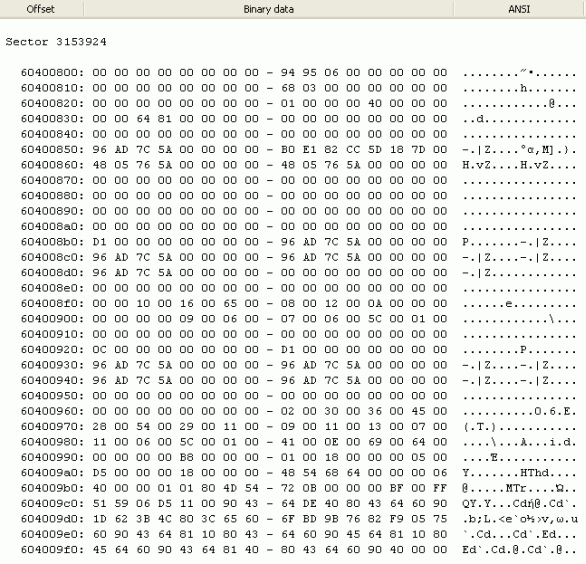 Click image to enlarge
Example of a parity sector

Looking at the table above, we can find the following parameters:


Now we can create such a RAID in R-Studio: 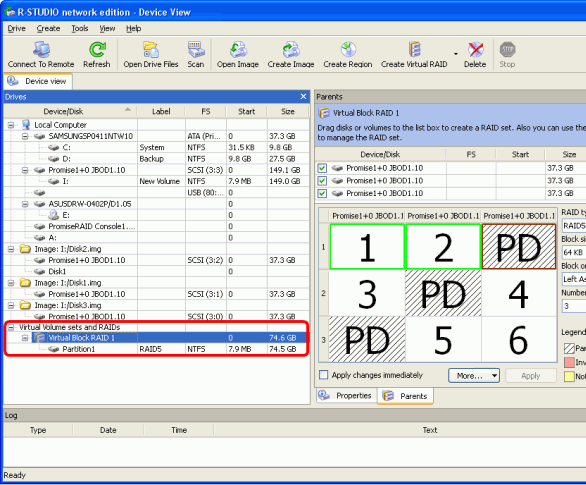 Double-click Partition 1 to enumerate its files: 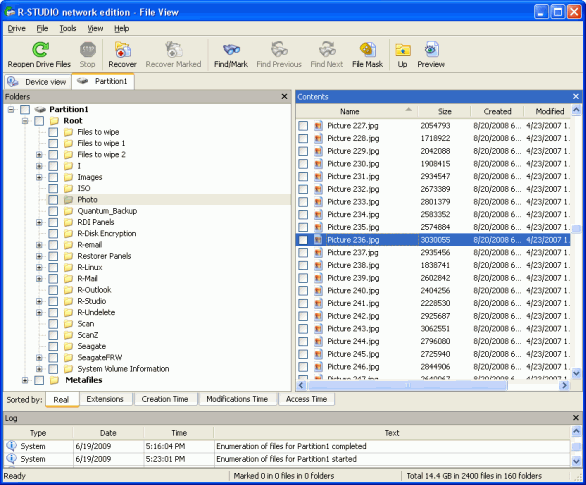 R-Studio shows a valid folder/file structure, which is a good symptom. To finally verify that we created the RAID with the correct parameters, you can preview a file. A file for the preview should be larger than the block size * (Number of disks -1). 128KB for our case. 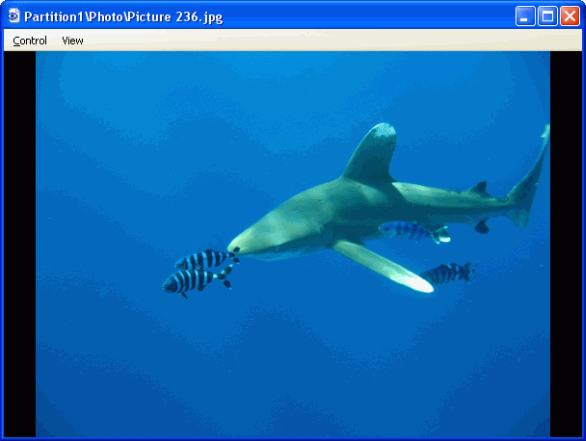 I really love your R-Studio product, I am doing Data Recovery as a professional, I used RS since the early versions and I loved the product, as far as I can tell, R-Studio, especially the Tech Version (but including the standard) is one of the best and excellent tools for a pro to have in the arsenal of tools in a pro DR lab, especially combining with the specialized Data Recovery hardware providers like DeepSpar, and PC3000, the rest of `wannabees` out there are waste of time, strongly recommend
Michael Avraham (OmniDataPlus Data recovery and repair)
I lost more than 200K files from my NAS due to a mistake. I tried 3 different recovery solutions over the 4 TB raid disks, and all of them performed ok but to be honest none of them were able to Raw recover the files and rename them with meaningful names out of the Metadata like R-TT did, then I was able to sort again my files and pictures and kind of restore all of them.

R-TT may not be the easiest or most user-friendly solution, but the algorithm used for the renaming saved me THOUSAND of hours of opening ...

Cesar reyes
Just recovered my old ext4 partition with R-Studio after trying testdisk and R-Linux without success. That partition was overwritten by another ext4 partition and I was losing my hope until I tried R-Studio demo. It detected all my files and directories again!